STATE OF THE NATION: REVIEWING THE 2018 AUSTRALIAN EMPLOYMENT MARKET

SEEK’s job ad data shows that 2018 was a strong year for the Australian employment market with new job ads up 8.6 per cent over the 12 months and in more good news for jobseekers, across all industries the average advertised salary up by 3.9 per cent.

Nationally Mining, Resource and Energy was the star performing industry over 2018 with new job ads up 32 per cent, the fourth largest contributing industry to overall national job ad growth.

Kendra Banks, Managing Director, SEEK ANZ comments: “It is good news for jobseekers that the 2018 employment market was stronger than the year prior. More encouraging is that growth in the employment market has come from a diverse range of industries. There is demand for candidates that can carry out highly technical roles to those who can support the frontline service needs of our population such as in healthcare roles”.

Commenting on employment across the board, Kendra says, it is interesting to see in our data indications of changes in the employment market as a result of what we’ve referred to at SEEK as a ‘hollowing out of the middle’ – we see increase demand for highly skilled, technology roles advertised across the ICT classification, along with demand for service sector roles advertised in the Healthcare & Medical classification. This reflects the demand for people in our labour market that can 'work on and with technology and AI' as well as those roles where technology and AI is less prevalent, such as high-touch variable roles such as nursing and aged care.” 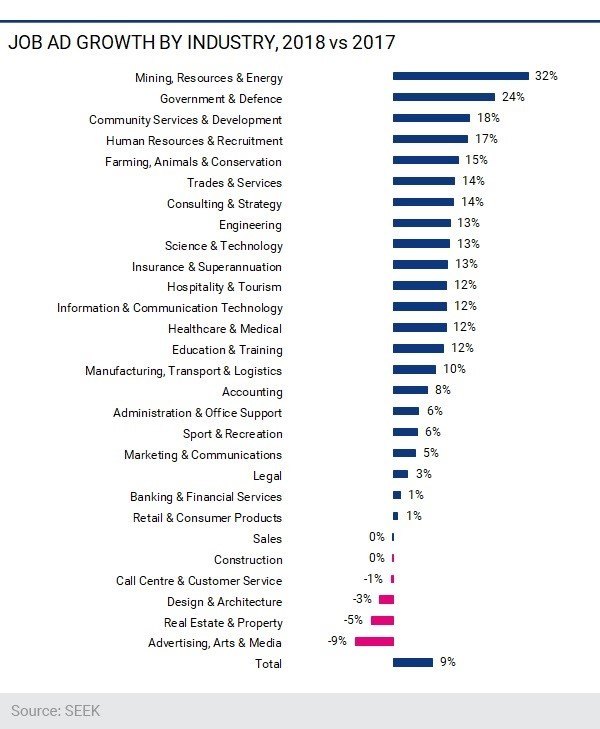 Commenting on December’s data Kendra explains, “The slight decline in December is usually due to the quiet Christmas period. What’s interesting from the December report is the 18% growth in Community services & Development job ads. We expect to see this continue for the first quarter in 2019 and potentially beyond”.

MEDIA NOTE: When reporting SEEK data, we request that you attribute SEEK as the source.